Securing a work visa was critical for Sid Pandiya as a graduating senior at UCLA. Many of Sid’s friends were considering the H-1B path, but Sid wanted to find a work visa that would allow him to live and work in the U.S. and grow his startup, Kona, an emotional intelligence platform.

Initially, Sid was afraid the O-1 visa was going to be unattainable because of the reputation it has for being difficult to get. After closing on a seed round, Sid worked with Legalpad to apply for the O-1. Sid chose Legalpad because of Legalpad’s track record helping hundreds of founders like him to navigate the O-1 process. His application was approved eight days after the first submission.

You could say communication comes naturally to Sid Pandiya. Sid was involved in speech and debate from an early age. Sid even picked up on different English accents to adapt to new schools, friends, and cultures. Born in Dubai, Sid and his family moved to Hong Kong and then to India before Sid moved to the United States for college. He is currently a Computer Science student at the University of California, Los Angeles.

Growing up around tech in Bangalore, Sid founded his first company at 15 to provide a peer-to-peer debate platform for high schoolers. The platform eventually morphed into an enterprise communication training product for companies like Toastmasters and PayPal to help their employees become better communicators through debate and public speaking.

Fast forward to 2019, Sid continued to think about communication in the workplace, and Kona was born. “We’ve been doing remote work before it was mainstream,” joked Pandiya.

While much of the workforce goes virtual, the need for managers and team members to connect on a human level remains as important as ever. The cost of employee disengagement is massive: $1 trillion per year across the U.S. economy. Yet the vast majority of workplaces still struggle to build strong working relationships, because managers are promoted to leadership based on performance as individuals, not their people skills. Remote workers feel isolated, and building culture is difficult when managers struggle with emotional intelligence. That’s why Sid and his co-founders felt compelled to build an emotional intelligence platform for remote teams.

“We help managers build the habits of an emotionally intelligent leader. We help them build these habits in the context of their daily workflow,” said Pandiya. “Kona helps you stay emotionally connected to your team, understand how they’re feeling, and understand how to lead them better.”

summer of 2020. While at Techstars, Kona began to take shape and gained momentum. Kona just launched on Product Hunt and has seen strong early engagement. “We have a lot of interesting things in the pipeline,” Pandiya said. “Company culture is a set of habits that employees have. We already have daily emotional check-ins, daily reflections, and plan to incorporate more features like gratitude practices and better feedback practices.” Managers will be able to glean insights from the data collected to adapt the way they lead and figure out what influences team morale while also creating psychological safety.

Finding a path forward with the O-1 visa

Working at a startup posed a risk for securing a work visa after school. Like many international college students studying in the United States, Sid was thinking about the options available to him to remain in the U.S. after graduation. Many of Sid’s friends were considering the H-1B path. “My friends make career decisions based on getting a work visa,” Sid said. “I needed a work visa that would allow me to continue working on building Kona.” Sid started researching the O-1: a temporary work visa for those with extraordinary ability. The word “extraordinary” means that the visa is awarded to individuals at the top of their field, which can seem unattainable, especially to young founders. While researching various options, Sid came across Legalpad. Legalpad specializes in securing O-1 visas for entrepreneurs like Sid. 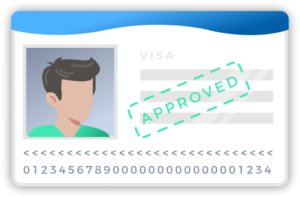 Sid was introduced to Legalpad as soon as he was accepted to Techstars. “I never had a doubt about what I needed to do. Legalpad told me exactly what to do and when,” Pandiya shared. “They made me believe that it wasn’t a matter of if I would get an approval, but a matter of when. I felt taken care of from the first time I met with the team to receiving my approval notice.” Sid received an approval just eight days after Legalpad submitted his petition. As a founder with O-1 status, Sid now has the flexibility he needs to live and work in the U.S. after school to keep growing Kona.

“The O-1 approval completely changed my life. Working with Legalpad has allowed me to be able to do what I love and not have to worry about anything and that’s why I won’t ever forget this.”