We recently got to spend some time talking with Vicki Guan, co-founder of Evri. She’s one of our innovative and inspiring customers who has drawn on her life experiences as she’s created a market-altering product. Even in the midst of so many unforeseen impacts of COVID-19, Vicki and her team are working tirelessly to adapt to our changing world.

More about that later, but for now, let’s delve into Vicki’s startup, Evri!

Evri in the midst of COVID-19

Up until this point, Evri has been building partnerships with airports, malls, and department stores, as well as with companies who would like to use Evri to sell strategically in prime locations. Yet as you can imagine, COVID-19 has put a halt to much of Evri’s endeavors.

With customers going out of business and partnership launches pushed out indefinitely, the logical path forward for Evri seems to wait it out until the world is back to normal. Yet the conviction of Evri’s team has been that they must “help in whatever way [they] can,” Vicki told me.

In these unforeseen circumstances, Evri is adapting their technology to create a free sanitization product distribution with their roaming, touch-less technology. “We spent days retooling our technology to turn our retail solution into a self-roaming hand sanitizer solution, currently called Evri Hygiene,” Vicki shared.

Interestingly, the more we develop Evri Hygiene, the more we realize sanitization will play an important role in all future technology post-COVID, and we are actively adding sanitization features to our retail offerings as well.

Turning retail into a moving commodity

Last August, Vicki and her co-founder began brainstorming what it might look like to make retail a “moving commodity”. They solidified the idea while Vicki worked full-time at Bird, the scooter startup that has populated cities across the globe with electric scooters you can instantly rent on an app.

At Bird, Vicki oversaw the product engineering team and her time at Bird undoubtedly influenced Evri. Between Bird and Evri, “the underlying algorithm is very similar,” Vicki explained to me. A scooter startup like Bird needs to predict when and where people might want to ride a scooter to maximize profits. At Evri, the same type of logic goes into predicting when and where there will be demand for a variety of products.

What Vicki and her team are building is comparable to a vending machine. However, what’s different about Evri is that it's able to predict where and when products will be in demand, and it is able to move to those locations and restock itself when needed.

As compared to traditional retail, what Evri is building will be “able to cover a larger geographic area, at a very, very low CapEx cost,” Vicki explained to me. “The store is smart enough to be able to move to prime locations, sit there for a while, and when the demand is lower, it will go to a different location.”

Discovering a path forward with the O-1A visa

We all know there can be many roadblocks when it comes to founding a company. A study in 2018 found that in the United States, over 50% of unicorns have an immigrant founder. But at Legalpad we don’t believe securing a visa should be a roadblock.

Vicki was born in China and moved to Canada with her family when she was young. After eight years in Canada, her family moved to the United States. Even though she hasn’t been to Canada in over a decade, she is a Canadian citizen.

When it came to founding Evri, Vicki was in the United States on a H1-B with her former employer. “In the beginning… there were a lot of unknowns to us,” Vicki told me. Launching Evri but still working full-time posed challenges, so Vicki put some good time and thought into figuring out what visa option would work.

She did her research and spoke with a number of legal firms about the O-1 visa, but most of those conversations went nowhere. “There was always something that made other law firms not comfortable taking my case,” Vicki told me.

“I don’t really fit the typical profile,” Vicki told me.

Yet for Legalpad, Vicki’s background isn’t so different from the background of our other O-1A visa customers. In order to qualify for the O-1 visa, you need to meet three of eight criteria. Vicki met five of those criteria, largely in part from founding a company that received venture capital.

“Overall, it was very streamlined, very easy,” Vicki told me as we looked back on her experience with Legalpad. “Legalpad has figured out a path for the O-1 visa that a lot of lawyers don’t get,” she went on to say. 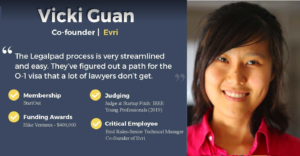 Vicki’s advice to others who are in need of a work visa for the United States is this:

No matter the answer you get from one lawyer or even multiple lawyers, you should always look for other people who have different opinions. Don’t give up easily because there are more options than you might realize.

We are thankful to have been a positive part of Vicki’s startup journey, and we can’t wait to see how Evri reimagines retail.