All The Data You Ever Wanted On The H-1B

Whether you’re on an active H-1B, renewing, considering applying, or just one of those weird people who looks at data for fun (like us), you’re probably curious about who is on an H-1B, where they live and where they work.

To no surprise, tech and engineering companies dominate the H-1B visa world. But before we look at the top 30 companies, let’s take a look at the household names -- the companies your parents would be bragging to all their friends about the second you started working there.

You're probably not surprised to see Google, Amazon, and Microsoft in the top ten, who all rely on top software engineering talent. Software engineering just so happen to be the most common profession of H-1B holders. Now let's look at the real leaders in H-1B. 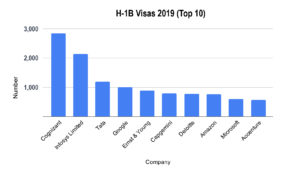 The top ten stretch across  multiple industries, but the top three H-1B companies are all Indian corporations with a large presence in the United States. Cognizant (IT services), Infosys (IT services), and Tata (a conglomerate whose U.S. presence focuses in... you guessed it... IT services). Also on the list are two of the "Big Four" in accounting: Ernst & Young and Deloitte. The other two, PricewaterhouseCoopers and KPMG aren't far behind, both ranking in the top 40. 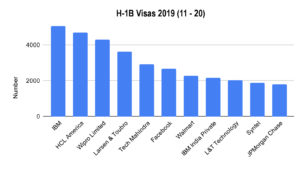 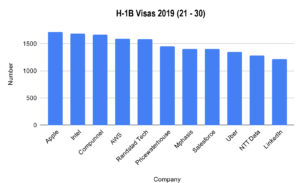 While it's great to see the companies that lead the pack, you probably also want to know who the heck these companies are hiring. The vast majority of H-1B holders are engineers, specifically software engineers, developers, and other disciplines within the software industry. Data scientists, analysts, accountants, and academics also ranked high on the list. 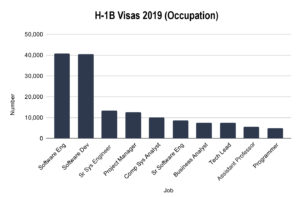 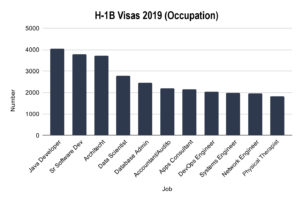 H-1B holders get paid for their expertise, with the majority of them making over 75K a year, and 40% making over 100K. 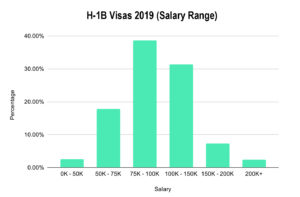 There aren’t many surprises when it comes to the location of H-1B workers, with the vast majority working in major tech hubs like Silicon Valley, Seattle, and New York. One standout is College Station, TX -- the HQ of Cognizant Technology, the number one issuer of H-1Bs in 2019. 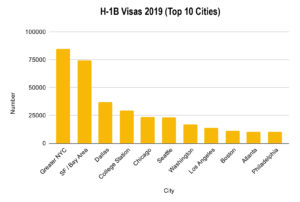 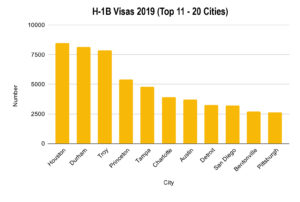 We hope you enjoyed looking a little deeper at the H-1B. Wherever you are in the process, we wish you the best of luck! If you’re interested in a weekly work visa update from Legalpad, sign up with the form below.