This week, we’re looking at data on the O-1 visa. Called the “genius visa” by some, the O-1 visa is granted to those with extraordinary ability in science, technology, business, and other areas of expertise.

By country, Great Britain/Northern Ireland (2,935) lead the pack by quite a large margin, more than double the next country, Brazil (1,623). Four other European countries place in the top ten: France, Germany, Italy, and Spain. 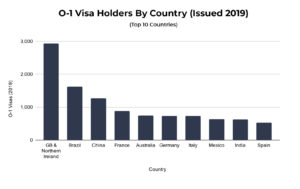 South Korea just missed the top ten by less than 20 visas, with Russia not far behind. The top 20 countries are responsible for over 25% of O-1s issued in 2019. 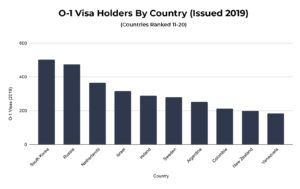 Things start to level off after we go beyond the top 20 countries. Each country on this list hovers between 100-150 O-1 visas issued in 2019. 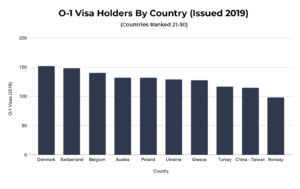 While the O-1 is difficult to qualify for, there's a chance USCIS will see more applications in the future, as the DOL has placed higher restrictions on other visa categories like the H-1B. If you're interested in learning more about the O-1 visa, check out our in-depth write-up on the criteria and how to qualify here.