We recently sat down (virtually) with data scientist, entrepreneur, and O-1 visa holder Meryll Dindin to learn more about his career, company, and immigration journey. Meryll is the co-founder of Polygon, a Techstars company that uses smart technology and science to make it easier for licensed psychologists to diagnose learning difficulties like dyslexia and ADHD. We’re eager to share his incredible story with you!

Meryll was born in France to two chefs. As a child, he dreamed of becoming a cabinetmaker, but he went down a very different path leading to the U.S. healthtech scene. 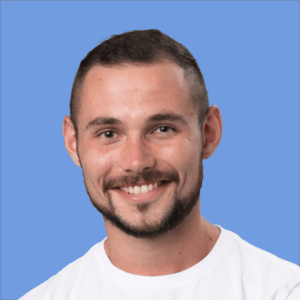 Meryll's parents worked hard to get him into good schools, where his natural talent for math and science was celebrated. Realizing his strengths gave him a new vision for his future and eventually led him first to a Bachelor's degree in Bioengineering and Biomedical Engineering at Université Paris-Sud and then a Master’s degree in Computer Science and Machine Learning at Ecole Centrale Paris.

In 2018, he moved across the Atlantic and to the West Coast of the United States to pursue a Master’s degree in Bioengineering and Biomedical Engineering at the University of California, Berkeley.

Founding a Healthtech Startup: It All Started With Pizza

It was at UC Berkeley over a free pizza student mixer event that Meryll first met his future co-founder, Jack Rolo. Jack had worked in strategy consulting at Parthenon-EY before coming to UC Berkeley to get his MBA. The two quickly began discussing founding a company together.

Polygon was born out of Meryll and Jack’s shared interest in using technology to solve one of the many issues that have remained untapped in the healthcare industry.

They chose to focus on the difficulty of diagnosing learning difficulties. As someone who struggled with undiagnosed dyslexia until adulthood, Jack was far too familiar with the weaknesses of the current

Meryll was already interested in the intersection of healthcare and artificial intelligence (AI), which set him up perfectly to found Polygon with Jack. “When I met Jack, I was already working on medical devices and technology applied to diabetes, Alzheimer’s, and Parkinson’s,” he told us.

Success Stories: The Freedom of a Diagnosis

When I asked Meryll to share a Polygon client success story, he explained that every single accurately assessed patient is a success.

Contrary to what one might think, diagnosing a learning difficulty can be liberating. A diagnosis resolves unanswered questions and provides a path forward. Ultimately, it is the first step to receiving the support needed to thrive in school, the workplace, and relationships.

One in five people has a learning difference, including dyslexia and ADHD. Yet far too many people go undiagnosed. Even with increasing awareness about learning differences, most schools worldwide still maintain a “wait to fail” approach in which diagnosis is only explored after a student has demonstrated significant academic struggles over a prolonged period.

The process is further prolonged as diagnosis often takes eight months or more. The result is students who struggle for years before getting the help they need. Many people are never officially diagnosed.

Meryll and his team are dedicated to changing the learning difference landscape. Polygon helps individuals get diagnosed in as little as two weeks, as compared to the many months, and even years it has historically taken.

Ultimately, Jack and Meryll want to see learning difficulty tests become as routine as optometrist visits. While your life might not be threatened if you miss your optometrist, it is something that most people typically do every few years. Just as you meet with an expert to get your eyes checked somewhat regularly, Meryll explains, you should also check in with a psychologist somewhat regularly.

Thankfully, Polygon is making this easier than ever with easy, quick, remote, and thorough services, all powered by state-of-the-art technology built by Meryll and his team.

While the core of what Polygon does is building and scaling technology to diagnose learning differences, a big part of Polygon is redefining intelligence.

“IQ is probably the worst metric you could ever use for intelligence,” Meryll explains. “There are a thousand ways to be smart.” Yet our current education systems are created for the average person, not accounting for the many individuals who learn differently.

With Polygon, Meryll is bringing together the best psychologists, aggregating knowledge, and scaling it so that new ways of understanding intelligence—rooted in the most recent science—are normalized.

By focusing on gifts more than weaknesses, Polygon helps individuals with learning differences, their parents, and schools understand where they may need extra help, and where their strengths lay.

The Journey to an O-1 Work Visa

When the idea of Polygon came about Meryll was finishing up his Master’s program at UC Berkeley on a student visa. Although it is possible to start a U.S. company without work authorization, you do need work authorization to be employed by the company. With this in mind, Meryll began the next step in his journey: getting a U.S. work visa!

Meryll heard about Legalpad through the grapevine at Techstars and decided to seek immigration help.

“Getting the O-1 visa helped with my mental health because now I know that for the next three years I can move freely in and out of the U.S.,” he said. Navigating U.S. immigration is stressful and confusing enough. Add launching an incredibly innovative company simultaneously, and it is a lot for one person to handle. Thankfully, the O-1 application process with Legalpad was “seamless and super easy” for Meryll.

Meryll also shared how people in his field have reacted to his visa status. According to Meryll, in a way, being on the O-1 visa provides some level of credentials to investors and peers. “There is this weird phenomenon where when you tell people that you’re on an O-1 visa, they say ‘ohhhhh’ seeing that you’ve been so highly recognized by U.S. immigration,” Meryll told us.

Overall, the O-1 visa was a perfect fit for Meryll, as it is for so many international founders. The freedom and flexibility that the O-1A provides, along with the ways that the O-1 criteria work well with startup founder profiles, make it a top choice for founders seeking to bring their businesses to the U.S.

“Getting the O-1 visa helped with my mental health because now I know that for the next three years I can move freely in and out of the U.S.”

During our conversation, we chatted with Meryll not only about the opportunities that a U.S. work visa provided to him and his company but also about the overall benefits a visa gives you when building a successful startup. “Raising VC funding outside of the U.S., even in our remote world, is complicated. Even not being incorporated in Delaware is a red flag,” he explained. Working for your startup in the U.S. helps solve these challenges.

Meryll’s advice for international founders wanting to start a U.S. company, or bring a foreign company to the U.S is to apply to U.S. business accelerator programs. Meryll went through Techstars, but other popular U.S. accelerators include Y Combinator, 500 Startups, SOSV, Plug and Play, and many more.

Beyond helping you rapidly grow your business, being a part of an accelerator opens up an invaluable community of mentors, investors, and peers that is nearly impossible to find elsewhere. As a bonus, an accelerator program membership may also help you satisfy some of the O-1 visa requirements.

You don’t need a work visa to attend an accelerator, you can come on ESTA or a B-1 tourist visa. Meryll also recommends coming to the U.S. to study on a student visa, building connections through your university, and then founding a company after graduation.

Do I Qualify for the O-1 Visa?

If you are also wondering how to get a startup founder work visa, we’re here to help! Set up a time to chat with our experienced immigration team about the best options for you.